The Hidden World of The Sabbath Tarot – The Chariot

“The victorious Witch King rides through the night air on a black stallion brandishing the torch of illumination that drives out the shadows that block his path. He has triumphed over the laws of Nature and looks down on all his enemies, high above struggle and worldly problems. Since his willpower is strong, he can manifest his witchcraft and achieve levitation, ascension, and take his place among the stars, becoming closer to the Celestial realm. He knows that if his concentration and focus break, he will fall from the sky and find his ruin.”

For many readers there are always cards that are deeply personal, for me, one of the cards that represents my story the most is The Chariot. Many of you know that I grew up in Lima, Peru. What many don’t know is that this was a time where Peru was going through a terrorist threat by The Shining Path. One of their tactics was to kidnap children for ransom, and it was soon discovered that I was one of their targets being the stepson of the owner of an American company in Peru. They would often infiltrate the homes of businessmen as hired help.

At the time we had a live-in maid who quickly became a part of the family and because we became so close with her, she warned us that we needed to leave. Little did we know our maid was one of their operatives. That is when my mother made the difficult decision to take me out of the country. Because of the immediate threat we had no time to apply for asylum.

Armed with only a single suitcase each, we left everything we ever knew behind and we came to the United States. The plan was to start the paperwork once we got here, but as immigrants with nothing, the process seemed impossible. Returning home was also not an option because in the early 2000’s my father was kidnapped and held for ransom but was able to escape from the van by fighting his captors. Because we weren’t citizens we couldn’t travel home, and I couldn’t see my father, or my friends.

Flash forward 26 years later to 2015. My mother who has since got her permanent residency was still trying to sponsor me but we received the horrible news that I would have to go back to Peru and apply from there. But almost as if by Fate, the US Supreme Court made the landmark decision to grant federal benefits to same sex married couples and I was finally able to marry my partner of then 7 years, giving me a quick path to permanent residency and the freedom to return home and see my father.

In December of 2018 all my plans were shattered when I got the news my father had passed away. When I got the news I immediately went to the consulate of Peru here in Chicago. I approached the security guard at the front desk, an older Black man dressed in a white suit oddly with white eyes, almost as if he was blind. He asked where we needed to go and I told him the Peruvian consulate. He said that because of a referendum election the consulate was closed, but I could go check just in case. My husband and I got in the elevator and reached the floor only to find the consulate with its lights off. Something told me to go to the door and push it. When I did, surprisingly it opened.

As I walked in, a man walked out from the back to tell me they were closed and the door was supposed to be locked. Unable to contain my emotions I told him my father just passed and I needed to go to Peru, but had no passport or a DNI (Peru’s national ID). As I explained the situation a few more people came out and they all began to help me. Despite not having any paperwork other than my birth certificate and my green card, they granted me a handwritten salvoconducto (letter of safe passage), a type of temporary one-way passport. This meant I had to apply for my actual passport when I got there. As we left the consulate the old man who was sitting there, who let us take the elevator, was gone, and instead a woman in a typical security guard uniform was in his place. Little did I know this wouldn’t be the last seemingly supernatural help I would get.

But this was it, 29 years had gone by and I was about to board a plane leaving the country that became my home, leaving my husband and mother, with the uncertainty I would be able to come back. The day after the funeral I had little time to grieve, I now had to figure out how to get home as my return flight was less than a week away.

My first stop was to get my DNI that I applied for in mid-November in Chicago. My uncle and I went to the RENIEC (National Registry of Identification and Civil Status), but because of the referendum the day before the lines were astronomical as many people had realized that their IDs have expired, so trying to get mine within my time frame was nearly impossible. I decided to take a chance and walk to the front of the line and tell the guard what was happening. To even my uncle’s surprise the guard escorted me directly to a teller who told me that my ID had already been shipped to the US and that I would have to wait for it to be delivered and returned which would be some time in February. She offered to check the package headed to Chicago, and miraculously it was there, about to be picked up within minutes

With time running out I was headed to the Superintendencia Nacional de Migraciones office to get my passport. Anyone familiar with the US passport process would tell you this was never going to happen.  Above the office there was a colossal statue of Saint Michael. I filled out the paperwork, had my picture taken, and expected to get a delivery date weeks later if I was lucky, but not even 30 minutes later I was handed my passport.

I had done it, I achieved everything I needed to, and I was on my way back to the US. As the plane ascended above Lima, Peru I looked out the window with a crucible of emotions: excitement, pride, disbelief, but also grief. The view from that small window became a symbol of my journey, of all my trials, successes, and all I had to overcome to return home and feel my native land beneath my feet. It represented a new freedom that allowed me to explore the world, and to never feel that restriction that comes with being undocumented.

Thus, The Chariot rides over the photo I took of my hometown as I flew back home. 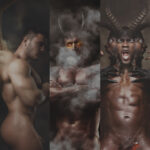 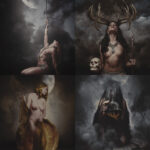 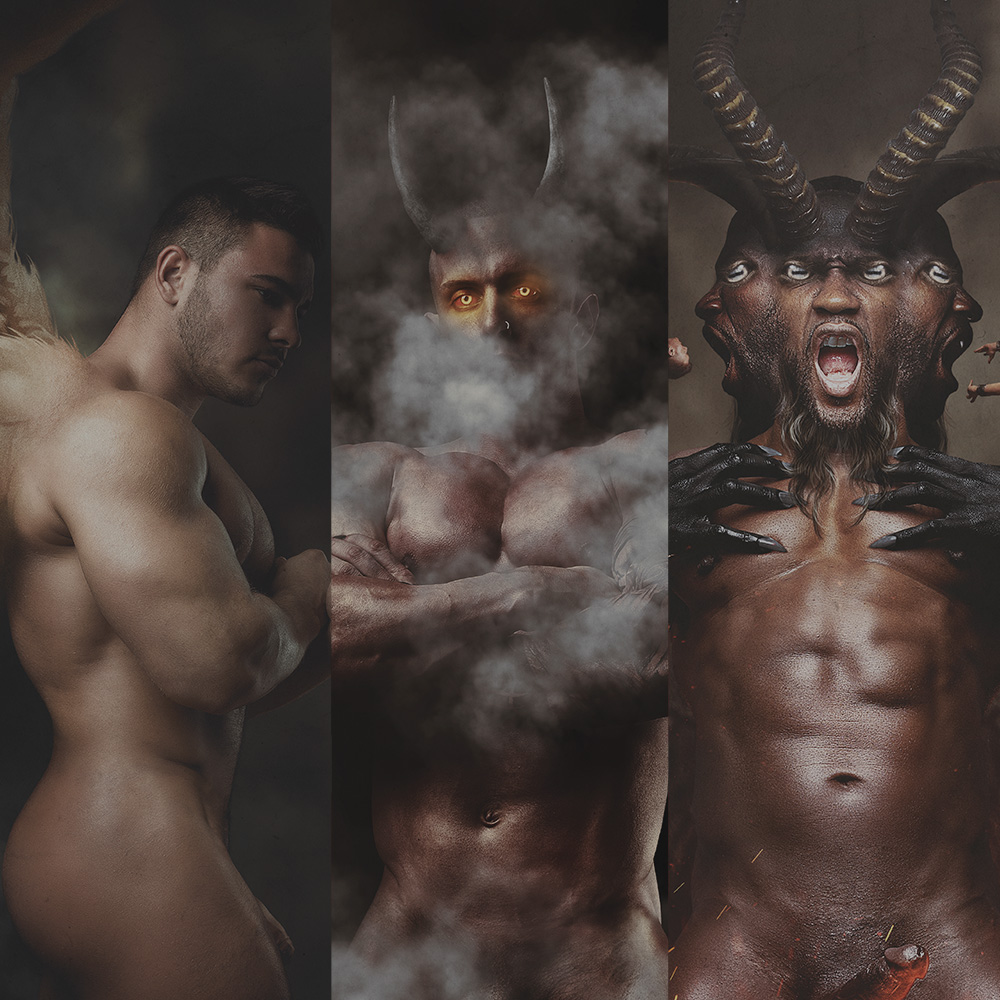 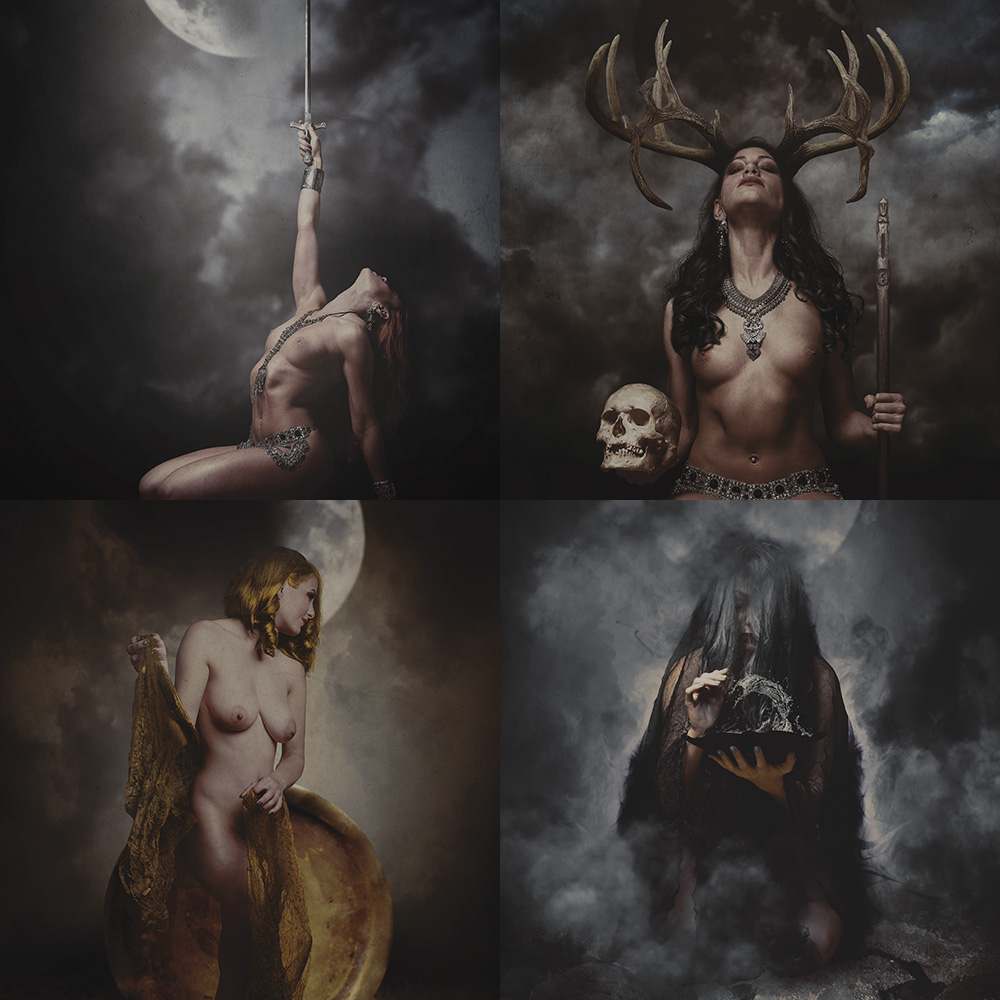 The Hidden World of The Sabbath Tarot – The Ladies